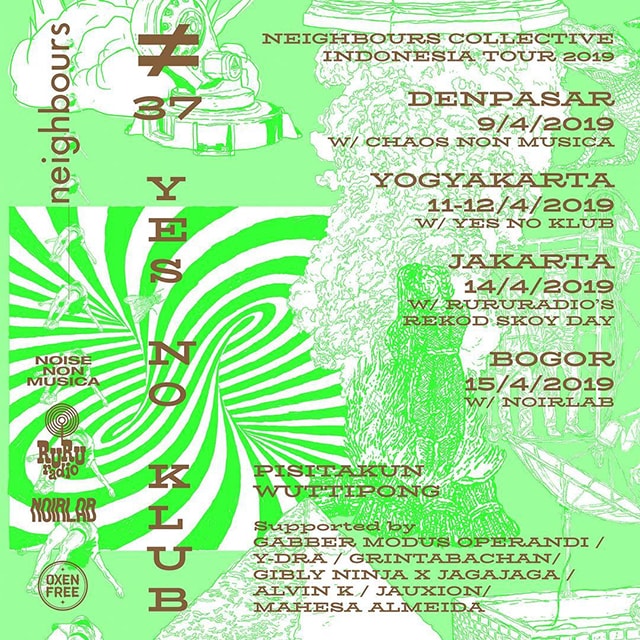 Starting in April 2019, Yes No Klub will begin a collaboration with Bangkok-based initiative Neighbours Collective to strengthen the experimental music scene in both regions. Neighbours Collective is a collective dedicated to bringing international cultural exchange programs and platforms that cultivate friendship between South East Asian countries, Asian countries and the world through promoting exchanges and cooperation in various cultural fields ranging from arts, music, food, knowledge and people to people exchange.

The first project kick-off with an Indonesian tour by 2 artists from Bangkok, Pisitakun and Wuttipong. Both will be accompanied by Denpasar-based duo Gabber Modus Operandi. This tour also working with Chaos Non Musica (Bali), RURUradio (Jakarta) and NOIRLAB (Bogor).

Pisitakun is an artist from Thailand known for his subversive contemporary art works. He has released his experimental electronic music works on Chinabot -a London-based label focusing on experimental music from Asia. His new album "Sosleep" released in 2018 followed with his performance at CTM Festival 2019 in Berlin.

Wuttipong was The Desktop Error guitarist who has been working in music industry and many notable movie soudtracks; such as "PoP" by Pen-Ek Ratanaruang, "By the Time It Gets Dark (Dao Kanong)" and "36" by Nawapol Thamrongrattanarit. He is recently exploring ambient noise electronic.