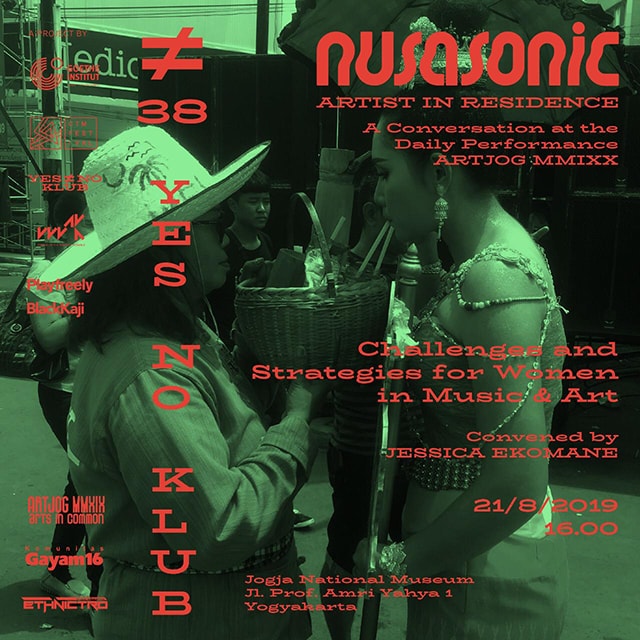 Part of the Nusasonic Residency Program hosted by Yes No Klub

“Even in the face of powerful structures of domination, it remains possible for each of us, especially those of us who are members of oppressed and/or exploited groups as well as those radical visionaries who may have race, class, and sex privilege, to define and determine alternative standards, to decide on the nature and extent of compromise.” - Bell Hooks.

As part of her residency with Nusasonic, electronic musician and sound artist Jessica Ekomane invites Yogyakarta-based musicians, artists, writers, and activists to share experiences, practical tools and strategies prototypes to tackle the obstacles faced by women in music & art. This is her second time in Yogyakarta, following her showcase in Nusasonic festival in October 2018.

The residency program in Yogyakarta is hosted by Nusasonic-partner Yes No Klub from July to September 2019.

Nusasonic is a multi-year project that plunges into a broad spectrum of experimental sound and music cultures in Southeast Asia, enabling dialogue within the region, with Europe, and beyond. Adopting a multi-perspective approach, the project is collaboratively created by Yes No Klub (Yogyakarta), WSK Festival of the Recently Possible (Manila), Playfreely/BlackKaji (Singapore), and CTM Festival for Adventurous Music & Art (Berlin). Nusasonic is an initiative of the Goethe-Institut in Southeast Asia.