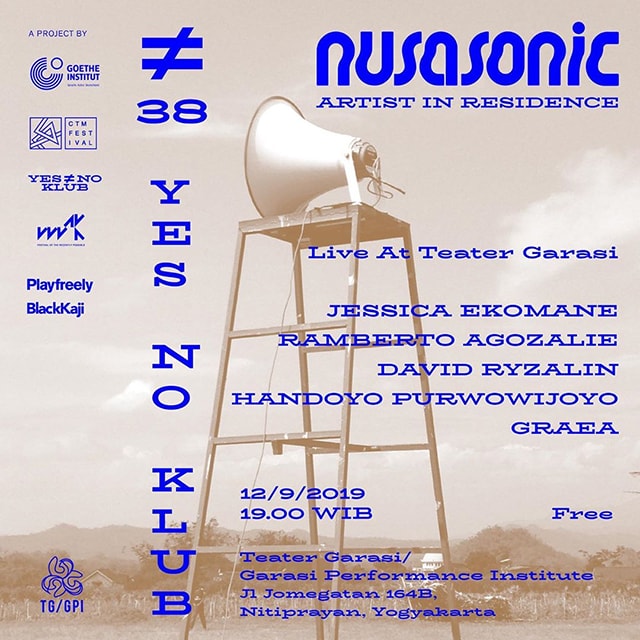 Part of the Nusasonic Residency Program hosted by Yes No Klub

At the end of her residency in Yogyakarta, Jessica Ekomane will perform with drummer Ramberto Agozalie (Zoo, Setabuhan) and also perform a solo set. They will be accompanied by experimentalist Handoyo Purwowijoyo, free software enthusiast David Ryzalin and newly formed all female band Graea consisting of Asa Rahmana, Dyah Isaka and Nadya Hatta. The concert will be specially set in a Quadrophonic and Stereo sound system.

The residency program in Yogyakarta is hosted by Nusasonic-partner Yes No Klub from July to September 2019. A concert and workshop also accompanied the residency.

Nusasonic is a multi-year project that plunges into a broad spectrum of experimental sound and music cultures in Southeast Asia, enabling dialogue within the region, with Europe, and beyond. Adopting a multi-perspective approach, the project is collaboratively created by Yes No Klub (Yogyakarta), WSK Festival of the Recently Possible (Manila), Playfreely/BlackKaji (Singapore), and CTM Festival for Adventurous Music & Art (Berlin).

Nusasonic is an initiative of the Goethe-Institut in Southeast Asia.